The pull-ups to the crossbar are one of the most important basic exercises. At runtime, many muscle groups are involved, allowing you to adjust the load on the spine, expand the latissimus and rhomboid muscles of the back. But not everyone can immediately master them. Negative pull-ups can come in to help.

What are they needed for?

What is a negative pull-up? This is a semi-phase basic exercise that uses muscles in the peak state of the load and helps to pass the phase of 30 degrees.

The 30-degree phase is an articular barrier that requires maximum use of the biceps flexor of the arm, the press, and the widest muscles. Often, in the absence of sufficient physical training, it is the joint barrier that prevents the athlete from learning to pull himself up completely.

Negative push-ups are needed for the following reasons:

In addition, this type of exercise is a good complement to the pull-up program for strength.

There are two basic techniques for doing the exercise:

The setting of the hands, affects only the emphasis between the muscles, in general, the technique of negative pull-ups for direct and the reverse grip does not differ.

To carry out negative pull-ups in the home and outdoors, you need a stand, for example, a stool. Before performing, you need to climb onto the stool so that your hands are 90 degrees relative to the crossbar. Next, with a jerk, perform the ascent to the upper phase, slowly descend, trying to stay as far as possible at the top. Repeat until exhausted.

It is important to maintain the body in a level state. No bent legs. Since in this case, the center of gravity changes, and the load on the lower parts of the latissimus muscles of the back decreases several times.

A special simulator with counterweights is used. To perform a negative pull-up, it is necessary to install a counterweight in the simulator in 90-95% of the total weight. Next, perform a full pull to the crossbar, then slowly lower, removing the legs from a special stand.

Variations on the theme

There is a huge number of variations on the topic of negative pull-ups. In particular, it is:

Each of them changes the emphasis and helps to achieve significant progress in the development of the back, and most importantly, with the help of negative pull-ups on the bar, you can finally master the full version of the exercise. This is especially true for beginning athletes or athletes of a large weight category.

After reaching the maximum result, you can go to the classic pull-up to the crossbar, using the same principles.

The benefits of negative pull-ups are the ability to independently adjust the load, and bring the general training to the refusal form. This in turn significantly increases power endurance.

It should be noted that in the presence of a block simulator, the need for negative pull-ups is completely reduced to zero, since such differentiation of loads can be carried out independently triple h bodybuilding workout, changing the weight on the block. However, pull-ups, including backlinks, have a number of significant advantages over the sports equipment:

But the most important advantage is the fixed weight, due to which – to conduct training without the risk of getting “re-shredded”, it is possible every day, which will greatly accelerate the process of increasing the efficiency of the muscular systems, together with an increase in glycogen stores in muscle tissues. 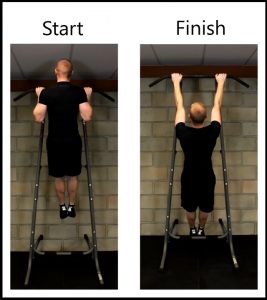 And most importantly, negative pull-ups – this is the only exercise that allows you to learn to pull those who have never been able to pull themselves up. In addition, with a full 6-week course, a person of any complexion will be able to perform up to 10 full-fledged pull-ups in 3 approaches, which will allow switching to more progressive training programs to increase the strength of the back.